EJI's Community Remembrance Project is part of our campaign to recognize the victims of lynching by collecting soil from lynching sites, erecting historical markers, and creating a national memorial that acknowledges the horrors of racial injustice.

In Lynching in America: Confronting the Legacy of Racial Terror, EJI documented more than 4400 racial terror lynchings in 12 Southern states — and more than 300 in eight states outside the South — between the end of Reconstruction in 1877 and 1950. Lynchings were violent and public acts of torture that traumatized black people throughout the country and were largely tolerated by state and federal officials.

Terror lynchings fueled the mass migration of millions of black people from the South into urban ghettos in the North and West in the first half of the 20th century. Lynching created a fearful environment in which racial subordination and segregation were maintained for decades. Most critically, lynching reinforced a legacy of racial inequality that has never been adequately addressed in America.

Public acknowledgment of mass violence is essential not only for victims and survivors, but also for perpetrators and bystanders who suffer from trauma and damage related to their participation in systematic violence and dehumanization.

Many communities where lynchings took place have erected monuments recognizing the Civil War, the Confederacy, and white Southerners' violent retaking of local power after Reconstruction. But very few monuments or memorials address the history and legacy of lynching, and most victims of lynching have never been publicly acknowledged.

To create greater awareness and understanding about racial terror lynchings, and to begin a necessary conversation that advances truth and reconciliation, EJI is working with communities to commemorate and recognize the traumatic era of lynching by collecting soil from lynching sites across the country and erecting historical markers and monuments in these spaces.

EJI has erected historical markers, conducted community remembrance events, and sponsored Racial Justice Essay Contests in several communities, and we continue to expand these efforts. From Selma and Tuscaloosa, Alabama, to Abbeville, South Carolina, EJI's markers have created a permanent record of racial terror violence. In rural communities like Letohatchee, Alabama, small towns like Brighton, Alabama, and larger communities like LaGrange, Georgia, Gadsden, Alabama, and Austin, Texas, markers give everyone in the community exposure to our history of racial injustice. And EJI supports diverse groups of local activists who are erecting their own markers in communities like Duluth, Minnesota, and Memphis, Tennessee.

EJI's Community Remembrance Project brings community members closer to the legacy of lynching and helps to make our history of racial injustice more visible across the American landscape.

Communities have collected soil from lynching sites from Chattanooga, Tennessee, to Maryland's Eastern Shore, and soil collections continue to be an important part of these efforts. Jars of collected soil comprise an exhibit in the Legacy Museum that reflects the history of lynching and expresses our generation's resolve to confront the continuing challenges that racial inequality creates.

If you are interested collecting soil, please complete this Interest Form. Completed soil collections can be returned to EJI or kept for local exhibits in the community, depending on the interest and needs of the community and EJI at that time.

The memorial structure at the center of the National Memorial for Peace and Justice is constructed of over 800 corten steel monuments, one for each county in the United States where a racial terror lynching took place. The names of the lynching victims are engraved on the monuments. In the six-acre park surrounding the memorial is a field of identical monuments, waiting to be claimed and installed in the counties they represent. Over time, the National Memorial will serve as a report on which parts of the country have confronted the truth of this terror and which have not.

EJI is inviting counties across the country to claim their monuments and install them in their permanent homes in the counties they represent. Eventually, this process will change the built environment of the Deep South and beyond to more honestly reflect our history. EJI staff are in conversation with dozens of communities seeking to claim their monuments, and we look forward to supporting these efforts to help local communities engage with this history in a constructive way.

We anticipate that monuments will become available for communities to claim beginning in 2019. As a meaningful step towards participating in this initiative, we encourage those interested in claiming a monument  to consider participating our programs to place a historical marker and to conduct a soil collection, which will allow communities to gain perspective and experience that we believe is crucial to managing the monument retrieval process wisely and effectively.

If you are interested in claiming a monument, please complete this Memorial Monument Inquiry Form. You will be included in our official records as having expressed interest in this process, which will allow us to reach out to you once we have finalized the protocols for claiming monuments.

EJI believes that truth and reconciliation are sequential. We must address oppressive histories by honestly and soberly recognizing the pain of the past.

As more communities join in this effort to concretize the experience of racial terror through discourse, memorials, markers, and other acts of truth-telling, more are overcoming the shadows cast by these grievous events. 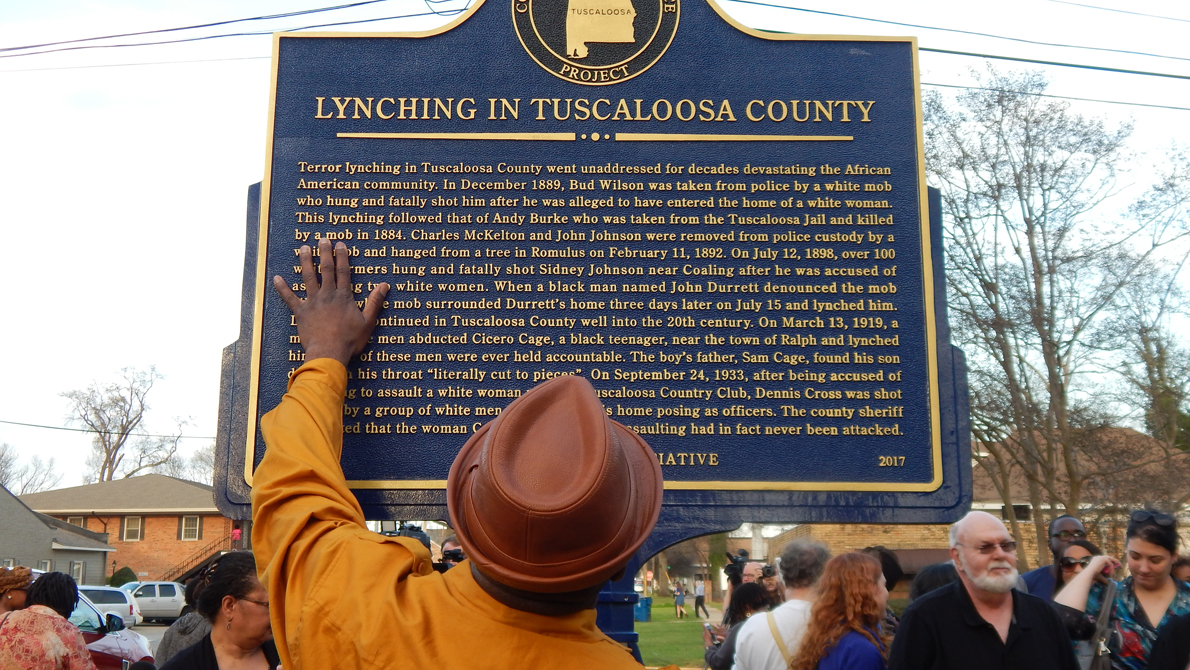