More than 600,000 people have visited the Legacy Museum and the National Memorial for Peace and Justice since they opened in April 2018. Local, national, and international visitors and media are describing the sites as powerful spaces for truthfully confronting American history.

The New York Times declares, "There is nothing like it in the country. Which is the point."

The Washington Post calls the memorial "one of the most powerful and effective new memorials created in a generation. . . . [T]his ambitious project will force America to confront not only its wretched history of lynching and racial terror, but also an ongoing legacy of fear and trauma that stretches unbroken from the days of slavery to the Black Lives Matter movement of today."

Rolling Stone describes the museum and memorial as "bold and unapologetic reminders of the American hatred, torture and murder of black people" and "exactly the remembrance America needs."

"[J]ust as a defendant must elocute on his or her crimes before the court, we cannot reconcile our past and move forward as a country until we begin to acknowledge its basest barbarism inflicted on its citizens." The Root

The memorial "is the single greatest work of American architecture of the 21st century, and the most successful memorial design since the 1982 debut of Maya Lin's Vietnam Veterans Memorial in Washington, D.C. . . . [T]he Legacy Museum and Memorial for Peace and Justice tell us we still have a long road to travel for racial equity." Dallas Morning News

Oprah Winfrey reported for 60 Minutes that the museum and memorial are part of a "reckoning taking place in America over how we remember our history."

"EJI's new cultural spaces are a way of 'putting our city on therapy, and our country.'" NPR

The memorial is "deeply moving" and "provides a bold bid for reconciliation. . . . The National Memorial for Peace and Justice is a marker writ large — exposing not just Montgomery's and the South's participation in lynching but also the nation's." Newsweek

"It is an ambitious project, an attempt to shift the conscience of the United States and to make the EJI’s litigation against systemic and individual injustices no longer necessary. The museum aims at redemption through narrative, a change of heart." London Review of Books

Alabama Memorial Remembers the 4,400-plus Who Were Lynched in the U.S. How Stuff Works

In addition to media reviews, many visitors have written about their experiences at these sites:

“What we’ve seen prompts an inner search for empathy and for courage. Part of the courage is asking ‘What would I have done then, observing this, being aware of the violence and horror?’ And then, ‘What am I prepared to do now?’” Professor Robert M. Franklin Jr., Emory University

"[I]t reaffirms the importance of truly embracing and reflecting upon these lives to more fully understand and fight against the racial injustice that continues today. . . It’s an experience neither of us will forget – nor should we." The James Irvine Foundation

"The museum and memorial . . . make a searing and convincing case that we can’t fully move forward unless we come to terms with our brutal past."  Sojourners

“We can never undo what happened. We can recognize the brutality, own it and promise this will never happen again.” Orlando Sentinel

"I think it's wrong to completely ignore or almost overlook that this ever happened. I mean, the best part of history is learning from it." WDAF-TV Kansas City

"EJI is calling us to the realization that racial disparities in health, wealth, education, and incarceration stem from our unresolved history of slavery, racial terror, and systematic discrimination." Repair the World

"One of our biggest takeaways from this trip was how even though laws have been passed and battles have been won in the courts, the perpetuation of white supremacy and the evolution of slavery that continues into our present day is the result of the fact that laws cannot change the heart . . . The historic pattern of racism is very real and we shouldn’t turn our heads away from looking directly at what is still happening to our African-American brothers and sisters." Erin Moniz, Anglican Multi-Ethnic Network (AMEN)

Here is a more complete list of reviews of the museum and memorial. 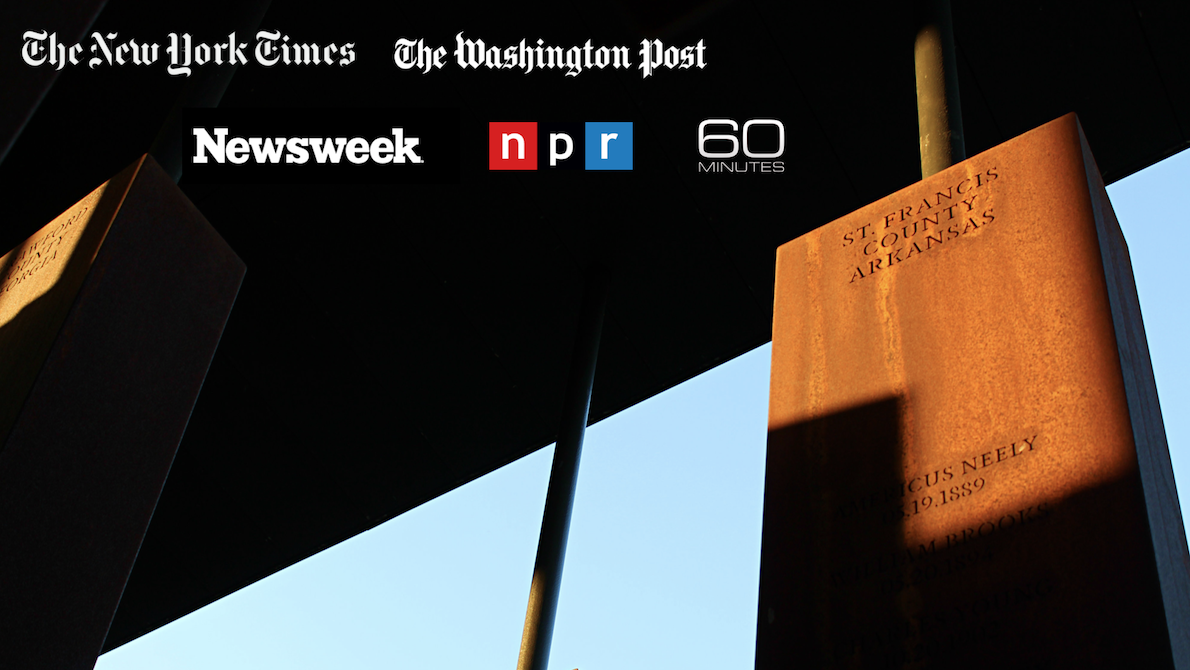